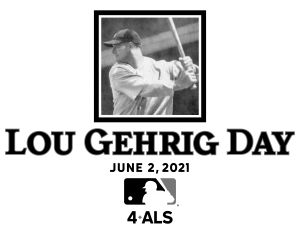 We’re excited to announce an official annual Lou Gehrig Day across Major League Baseball that honors his legacy on the field and raises awareness about ALS throughout the world!

Join us on June 2nd, 2021 as we officially celebrate Lou Gehrig Day!

You’ve heard Lou Gehrig’s iconic “Luckiest Man Alive” speech countless times. Close your eyes and you can see him wiping away tears as he bid farewell to baseball. You can feel the 62,000 fans in Yankee Stadium collectively chanting “We Want Lou” as the Iron Horse stood in front of the crowd one last time — not long before a little-known disease called amyotrophic lateral sclerosis (ALS) would take his life.

But what you may not know about that speech is that it was made on Lou Gehrig Appreciation Day at Yankee Stadium. It’s time to bring that back, in every stadium. For every person with ALS fighting like hell for a cure just like Lou did.